Buttons have played a role in recent studies in the English Class first grade class. Button physical education (P.E.) was followed by button mathematics. In P.E. class the idea was to select a button and then read the text written on a sheet of paper. If that activity mentioned in the text is something the pupil plans to do over the winter break,  s/he could place the button on the sheet of paper. Then the pupil needed to match the color of the button to a color on the chart in the corridor.

The color of the button determined what physical activity needed to be completed. For example, an orange button signified 10 squat jumps. A yellow button meant doing the duck walk the width of the gym and back. A dark blue button meant running the circumference of the gym.

During their math lesson the first graders used buttons to reinforce the relationship between addition and subtraction. It was fun for the pupils to physically move the buttons to add and take away.

The numbers seven and eight have been emphasized for the past month. At various math stations pupils practiced decomposition of these two numbers. The decomposition “machines” that the pupils crafted together with their fifth grade peer pals were very popular. Other math stations included a game using dice where the goal was to make 8’s. Another station involved using farm animals to create expressions for friends to solve. At the decomposition machine station pupils recorded the sets of decomposed numbers and determined which decomposed numbers appeared the most.

“Is it true?” is the theme of this year’s Finnish National Newspaper Week. Since 1995 schools and newspapers have joined forces to help school children develop media literacy skills. This year media literacy and active citizenship are the themes. During a week at the end of January and the beginning of February English Class pupils participated in all sorts of activities related to newspapers. In the photo collage above English Class second graders are reading weather reports and examining various maps and charts. The second graders were very keen on reading the newspaper daily. 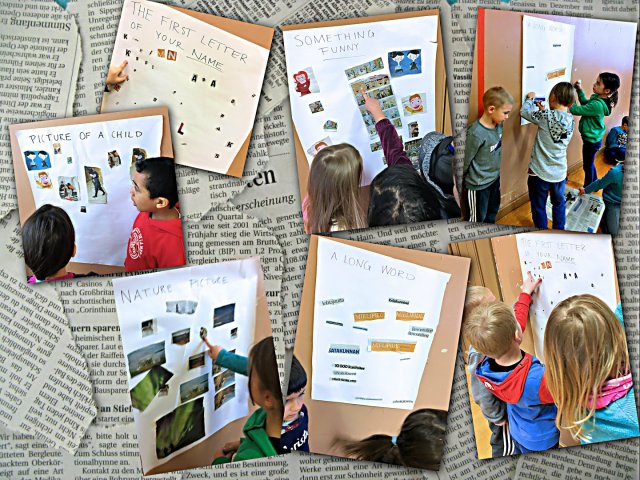 English Class kindergarten children, together with our first and second graders, sorted words, letters and pictures that they found in the newspaper. Some of the categories were nature pictures, pictures of children, funny things, the first letter of their names and a long word. 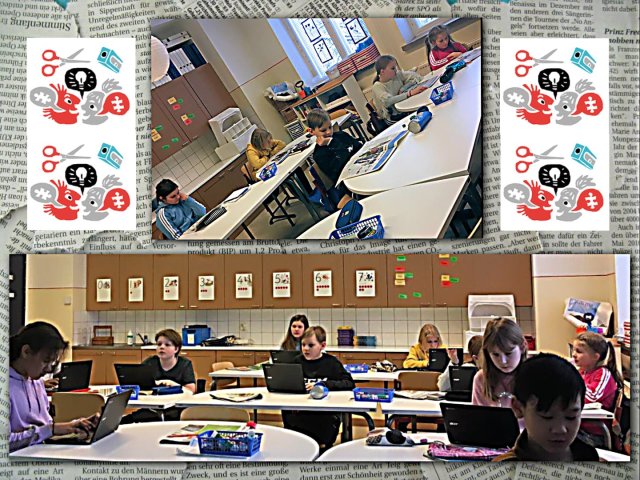 English Class fourth graders read news articles in their Finnish lessons throughout the month of January. During the month the pupils also learned to write news articles. During Newspaper Week each fourth grader had to write a news article on the subject of their choice and turn it in to their teacher, Ms. Kati, using Google Classroom. Pupils practiced word processing skills and the use of Google Classroom in January as well. Together the class discussed what a news article should contain and then they wrote two practice articles. The third article that they wrote served to showcase all of the skills they had acquired and was a “test” of sorts. Ms. Kati reported that the sound of a pin dropping could have been heard when the fourth graders set to their task. The focus and concentration was as intense as in a real newsroom!

English Class first and second graders crafted perky squirrels using strips of newspaper they cut and then glued to backing paper. Then, using a template each child cut out a squirrel shape and glued it to a background.

Clean up after crafting was great sport. The children wadded up the newspaper scraps into tight newspaper balls. They formed teams and at the given signal the teams started throwing newspaper “snowballs” at one another. The team with the fewest “snowballs” in their court at the end of the given time were the winners. In truth, everyone was a winner because cleaning up was so much fun. As one second grader said to Ms, Tellervo, “We used our newspapers down to the last shred!” And they actually did.

Two ice hockey players and a couple of representatives from Pori’s hometown ice hockey team, Ässät, visited our school for an assembly on Thursday morning this week. The team is making the rounds of all of the schools in Pori to bring an important message to pupils. That message is that everyone should be included; no one should be left out. The presentation began with a short video telling about our local ice hockey team. Then the team members told about the memories they had of their own school experiences. 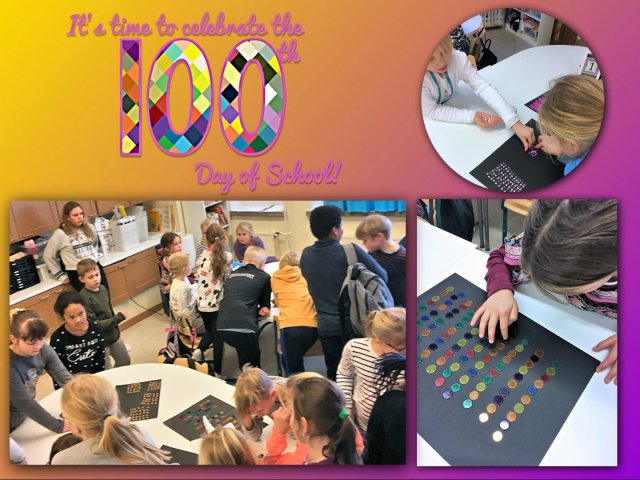 Yesterday, Thursday, January 17th, English Class pupils celebrated the fact that they have completed 100 school days of their 190 day school year. English Class second graders hosted an exhibition of 100’s. They displayed materials that they found in the classroom in arrays of one hundred. 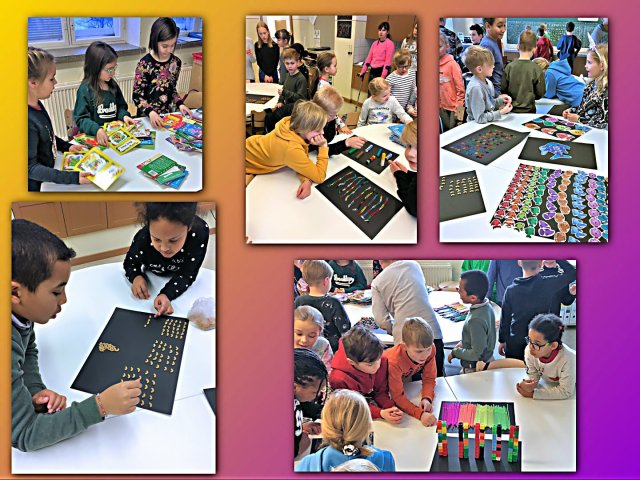 The second graders worked hard to complete their displays in the amount of time allotted. Sixth graders visited and checked the displays for accuracy and English Class third graders joined in in looking at the exhibits.

The 100th day project culminated when the 100-fish was ceremoniously brought out by Ms. Tellervo. The second graders had to sing for this to happen. To discover the significance of the 100-fish, please read this blog post.  A fine time was had by teachers and pupils alike.

English Class second graders are bursting with excitement. On Thursday, tomorrow, they will celebrate the 100th day of school. Yesterday in their physical education class they took a bit of jump start by doing the 100th Day Fitness Challenge exercises. 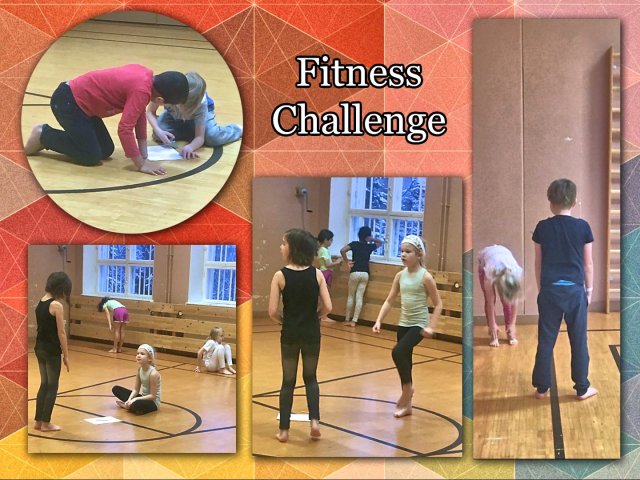 With intensity and enthusiasm they all successfully met the challenges. Good for them!

One of the great advantages of being in the English Classes at Cygnaeus School is the great diversity of our pupils’ backgrounds. English Class second graders were treated to a presentation on Christmas customs in Poland by one of their classmates, Lena, whose native country is Poland.

The second graders learned that Christmas Eve in Poland is called Wigilia, and that is when the most important part of Christmas takes place.  Christmas Eve dinner– kolacja wigilijna – begins when the first star appears in the sky. Dinner starts with sharing the Christmas wafer (opłatek – baked from wheat flour and water, usually rectangular). Each person receives a piece of a wafer and then people share it with one another eating a piece of a wafer and making wishes about the next year. Traditionally twelve courses are served for the meal, none of them containing any meat. Carp is served, as are dumplings called pierogi, cooked cabbage with mushrooms, and lots more. Desserts commonly feature poppy seeds. Christmas compote, made of cooked dried fruit, honey, cloves and cinnamon, is also popular. It is common practice in Poland to set an extra place setting at the table for an unexpected guest. Many families put some hay under the tablecloth as a reminder that Jesus was born in a stable.

Lena did a splendid job with her presentation and her classmates listened very attentively. Wesołych Świąt Bożego Narodzenia  / Merry Christmas to the readers of our blog.

In November English Class third graders participated in a pilot project organized by the Food Information Society of Finland (Ruokatieto Yhdistys).  At that time they visited a local grocery store. As a follow-up to that project, the third graders are calculating the number of sugar cubes that can be found in fizzy drinks like Coca Cola and ED energy drink. (One cube of sugar weighs about 4 grams.)

English Class first graders have been having lots of fun in math lessons this month. The emphasis has been on reinforcing the 0 – 5  math fact families. During a group lesson pupils circulated between three stations, math fact puzzles, decomposition practice at the benches and an adapted version of  the Halli Galli game where any fruit could be used as long as it totalled 5.

Another entire lesson was devoted to completing worksheets.

Whenever a pupil completed a section of a worksheet, s/he could go throw a die cube. If an even number was rolled, the first grader could add a building block to the castle the class was building. If an odd number was rolled, the pupil could move a figure called Navi (familiar from their Finnish reader) along the number line on the chalkboard. The entire class worked like mad. The completed collective castle was huge! And Navi had to return to the beginning of the number line countless times for a new round.

Yesterday, Friday, English Class sixth graders took their mathematics test by working in pairs. The test subject area included the challenging topics of conversions and angles in plane geometry. By working with one another to find the answers the pupils could bolster one another’s knowledge, which in essence is learning from one another, or peer learning. 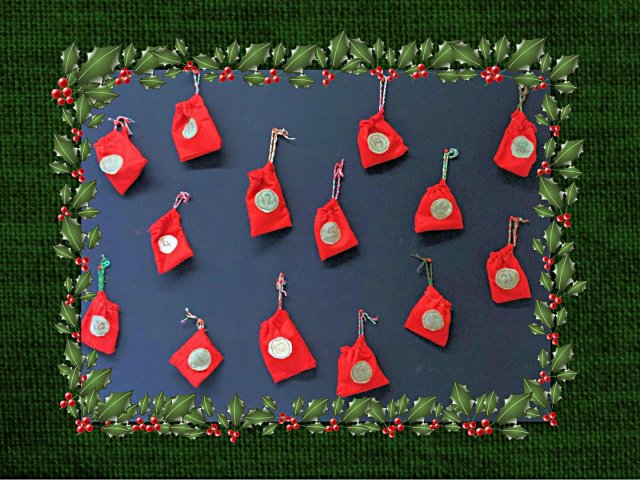 “Little Christmas” or pikkujoulu is celebrated at the beginning of Advent in Finland. 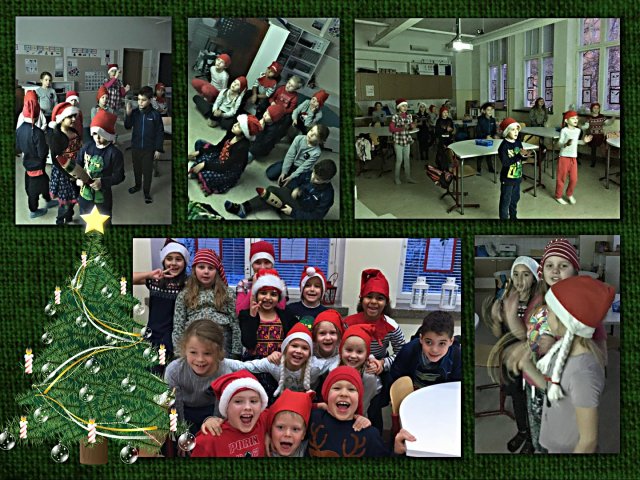 Last Friday the first grade class had all sorts of fun activities during the day.  The pupils brought their elf caps to school and they danced, played instruments and sang Christmas songs. They also participated in a qr-code scavenger hunt with the English Class third graders where they practiced vocabulary words related to Christmas.

Yesterday, on Monday, the first graders opened their first countdown to Christmas calendar bag with great anticipation and excitement. Inside the bag were directions to find Christmas decorations for their class. Somewhere on the same floor as their classroom is located, the paper read, a white box was hidden. The class’s task was to find that box while being as quiet as proper elves should be. It didn’t take those first grade elves very long to find the box hidden away high up on a shelf in the classroom of their fifth grade peer pals.

The white box contained white paper lanterns that needed to be put together. Once they were completed the pupils, with the help of their teacher, Ms. Kati, hung the white lanterns up in the classroom where they look very nice.

As Christmas approaches the first graders will make more decorations for their classroom. The craft work above showing woody shrubs like lingonberries was made by the first graders earlier this autumn, but looks so Christmas-like that they decided to leave the work up throughout this month. A light coat of snow outside added to the overall seasonal effect.